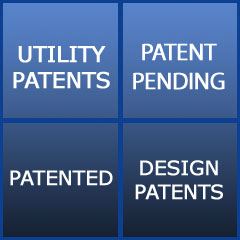 Table of Contents
WHAT IS A PATENT OR UTILITY PATENT?
TYPES OF PATENTS
WHO MAY APPLY FOR A PATENT?
BENEFITS OF PATENTS
FUNDAMENTAL REQUIREMENTS OF PATENTABILITY
PRIORITY DATE
PARIS CONVENTION FOR THE PROTECTION OF INDUSTRIAL PROPERTY
PATENT COOPERATION TREATY
PRELIMINARY PATENTABILITY SEARCH
DEADLINES WITHIN WHICH PATENT APPLICATIONS MUST BE FILED
EXPIRY OR LAPSE OF PATENTS
STEPS INVOLVED IN PATENT PROTECTION

WHAT IS A PATENT OR UTILITY PATENT?

A Utility Patent, often simply referred to as a Patent, is a statutory right, granted on a country by country (and sometimes on a region by region) basis which gives the Patent holder, the Patentee, the exclusive right to make, use or sell the invention in the country or region of protection. Patent protection cannot be obtained under the common law, by usage or otherwise, and Patents in most if not all countries, are only obtained by way of a government grant after making a timely application for a Patent.

As noted above, a Patent or Utility Patent typically covers the working principal or functionality of an invention. For a machine this might mean the various components which make a machine operable not just what the machine looks like when assembled. A Patent or Utility Patent is often said to cover function or utility but not design or aesthetic features. An Industrial Design in Canada or a Design Patent in the USA, typically covers the shape, pattern, ornamentation or configuration of a useful object but not the function thereof. For example an Industrial Design/Design Patent might protect the external shape of a suitcase and/or any artwork or design on the suitcase, but not the function of what the suitcase might be particularly suited to hold internally. A plant breeder’s right under the Plant Breeder’s Rights Act (Canada) and a Plant Patent in the USA substantially protect new varieties of plants. An integrated circuit topography under the Integrated Circuit Typography Act (Canada), and as a Patent in the USA, covers the interconnections of the elements of an integrated circuit product and the various layers thereof.

WHO MAY APPLY FOR A PATENT?

Only an inventor or inventors who created the subject matter of an invention may apply for a Patent or equivalent protection. Furthermore, if an applicant is not an inventor the invention may already have been known in which case there is no invention to be applied for.

The holder or Patentee of a Patent during the life of the Patent (before expiry or earlier lapse) is granted the exclusive right to make, use or sell the invention in the country or region of grant. This right is really a right of exclusion, that is a monopoly to prevent third parties from making using or selling the invention within the relevant jurisdiction, unless a license has been obtained from the Patent holder. This Patent right also generally includes a prohibition on importing infringing articles and may even cover the prohibition on the import of items made abroad by a process patented within the importing jurisdiction. This may change from country to country.

Almost worldwide an invention must meet three (3) criteria in order to be capable of receiving Patent protection. These criteria are:

An application must also meet numerous additional requirements but these above-mentioned requirements are the most fundamental and substantially common worldwide. Each of these three (3) components is a fundamental requirement under the Patent Cooperation Treaty discussed further below.

PARIS CONVENTION FOR THE PROTECTION OF INDUSTRIAL PROPERTY

This is an International Treaty that has been in existence for over 100 years, with additional countries added in that period of time, which, with respect to Utility Patents, permits a Patent applicant to claim priority, that is protection within a particular country before the actual filing date of the Patent application in that country retroactively back to the date of filing in the first country for which a Patent application was filed for the same invention. A subsequent application filed anywhere in the world more than one year after the first filing for the same invention will not be capable of obtaining a priority date and priority protection. In other words once a proper regularly filed Utility Patent application is filed in one member country under the Paris Convention, that Patent applicant may apply in all other member countries under the Paris Convention within one year of the first filing for Patent protection in any other member country.

Prior to filing a Patent application, a Patent agent will usually conduct a Preliminary Patentability search on the Patent records of one or more country and provide an opinion, usually a written opinion, as to patentability in one or more countries of interest. This is called a Preliminary Patentability Search and Opinion because this is performed before a patent application is filed, and for the purpose of determining the scope of protection to which the applicant is legitimately entitled and because this search is not the official search prepared by one or more national or regional Patent Offices.

DEADLINES WITHIN WHICH A PATENT APPLICATION MUST BE FILED
There are multiple deadlines which arise in the processing of a Patent application in one or more country, and in the case of filing in multiple countries, these deadlines may be in the hundreds over the life of a particular Patent application or Patent. Patent practitioners maintain specialized software for reminder systems which advise the professional of the requisite due dates decades into the future, as well as in the short term, which would otherwise be missed by a Patent applicant or Patent holder.

EXPIRY OR LAPSE OF PATENTS

Substantially worldwide, the term of a particular patent terminates or expires 20 years after the date of filing of the application in a particular country or region. This means that the lifespan of the actual Patent will vary depending upon when the Patent was granted. Certain earlier issued Patents may have a term of 17 years from the issue date depending on timing. This 20 year term may be cut short by a Patent lapsing earlier than the scheduled expiry date for failure to take steps to maintain an issued Patent, typically by the payment of periodic maintenance fees which are intended to show interest in the invention by the Patent holder. In the absence of the timely payment of required maintenance fees, the invention covered by the Patent will then irrevocably fall into the public domain.

Patent applications, before a Patent is granted, may go abandoned for a number of reasons including failure to respond to any required due date or Office Action (correspondence from a particular Patent Office requiring something to be done by a particular due date).

1. Initial consultation with a Patent professional and decision to attempt patent protection in one or more countries;
2. Patent professional orders and reviews preliminary patentability search results and prepares a preliminary patentability opinion;
3. Patent professional prepares the initial Patent specification and patent application for one or more particular country, the filing date in the first country of filing becoming the priority date;
4. Receipt and reporting on Filing Receipt indicating that the formalities of filing in a particular country have been met and confirming that a filing date and filing number have been granted in a particular country or region;
5. Consider filing subsequent applications claiming priority within 12 months of a first patent filing, under the Paris Convention. Filing of subsequent Patent applications, usually with the same Patent specification, include different Patent application documents for each country or region. An International Patent application under the Patent Cooperation Treaty may be filed up until this date, and rarely, thereafter;
6. Publication of Patent applications in substantially all countries takes place 18 months after the priority date in all countries where priority has been claimed. This publication takes place automatically and constitutes a public disclosure. In some circumstances where a public disclosure has not been made earlier, it still may be possible to file the same or amended application in Canada and in the USA within the one year grace period of the first public disclosure, which in this case would be the automatic publication of the patent application at 18 months from priority. The Patent professional will typically report on the publication in countries of publication and provide copies of the application as published. The application may be checked for accuracy as applicable. These published applications are the first government versions of the applicant’s Patent application and look very similar to issued patents and make good documents for marketing and licensing purposes.

7. Maintenance fees may need to be paid and maintenance requested on Patent applications in particular countries before Examination of the application takes place and before a Patent is issued, although in many countries maintenance fees do not commence until a Patent issues;
8. Receipt, review and responding to one or more Examination Reports (office actions) from a Patent Office;
9. If through the exchange of Examination Reports and responses thereto, throughout a period known as prosecution, the Patent Examiner can be satisfied that a Patent application is in condition for allowance, the Patent Examiner issues a document called a Notice of Allowance or Notice of Allowability indicating the steps that must be taken in order for a Patent to be issued;
10. The Patent professional then pays all publication and issue fees and requests Patent issuance;
11. The Patent then issues and upon receipt is checked as to accuracy and the Patent Professional reports to the Patentee on the issue of the Patent and diarizes all due dates known at that time for the remainder of the 20 year term of the Patent. If corrections are required, the Patent Office will be requested to make corrections.
12. Periodic maintenance fees will be required throughout the life of the Patent in most countries, failing which Patent protection will lapse and be permanently lost. Maintenance fee due days are typically diarized by the Patent professional and Patent holder is reminded periodically of upcoming due dates. This service is part of the usual fees and expenses incurred in the regular maintenance of a Patent application or Patent;
13. A Patent may be reviewed periodically in order to determine whether or not significant improvements have been made to the invention, which improvements might be the subject of a further new patent application to extend Patent protection for the product (but not the original invention) in a process known as “evergreening”. The Patent professional may review this with the Patent holder periodically;
14. If infringement occurs during the life of the Patent the Patent holder will typically consult with a Patent lawyer and decide whether or not a cease and desist letter and possibly litigation should be initiated to restrain the infringement.